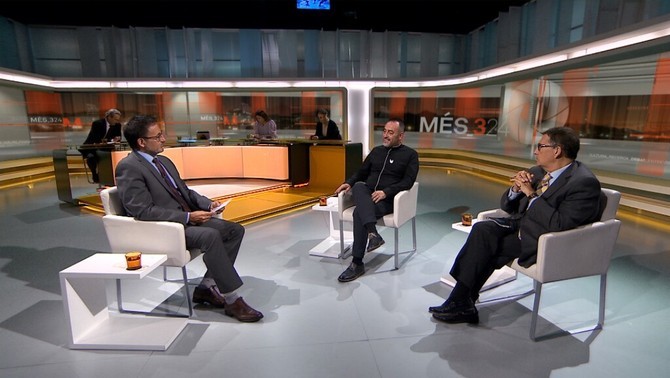 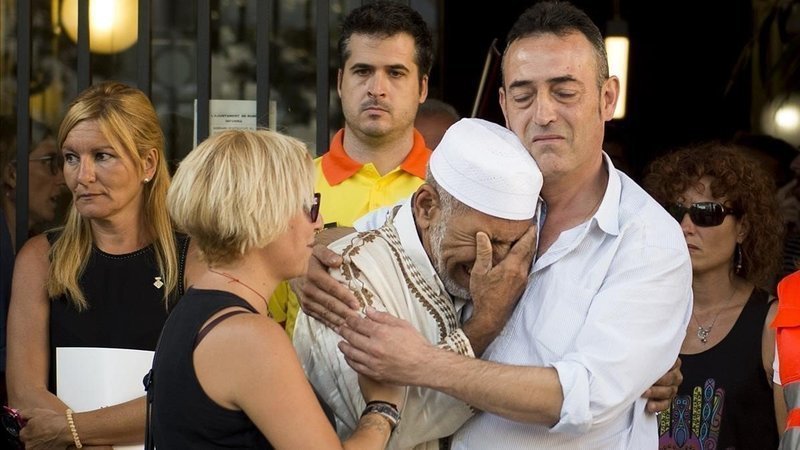 I am Javier Martínez, father of Xavi Martínez Mompart, the three-year-old boy killed in the terrorist attack on the Barcelona stream.

First of all, we want to thank all the people who have given us your support in one way or another. We want to tell you that we have felt your warmth in these difficult moments of loneliness, you have conveyed to us your most generous empathy with every message of support received, every look, hug or gesture. This fight is for everyone.

We need your help now.

In August 2017, Catalonia suffered a series of serious attacks, in which 16 people died and 29 were injured in Alcanar, 125 in the Rambla, 3 Mossos de Barcelona (Catalan police) and 12 in Cambrils. 169 in total (according to lists of processing act) that do not match those submitted by the Spanish Ministry of Interior.

Now we want to remember the names of the dead that we will always keep in mind:

We want to give you a summary of our reason for asking for help.

The beginning of our struggle

Our struggle began almost three years ago. At the moment we live in the first person the treatment of the different institutions that had to help us at that time, guide us, advise us, explain the procedures, etc. The answer was uncertainty, frustration and, unfortunately, loneliness.

In those moments we experience the inhumanity of some journalists who added painful and morbid images to their publications, some institutions that go to sleep in us inappropriately, some people who sought to take advantage of the pain of others, etc. And no one to guide us.

Amidst so much confusion and acceptance we find messages of hatred towards Muslims that we want to stop.

We add the video where Javier, in the TV3 FAQ’S program, explains how it started despite the reasons that started us in the fight.

Thanks to our complaints, we know Robert Manrique and the UAVAT (Unit for Attention and Assessment of Those Affected by Terrorism), David Torrents and many other people who will advise us in this world unknown to us and which, without knowing it, unfortunately , is becoming a way of life.

As we ask questions, we come across answers, some of which we did not expect, and we begin to ask for explanations from all the administrations that left us.

There is no time yet to talk about all of them, but here are some of them.

Why does Javier Martínez start this fight?

He explains that there are two main reasons, although over time and with more information, the struggle has been further strengthened.

The first impact I suffered was in a personal conversation in the office of the judge instructing the case of the murder of my son, in Madrid. Accompanied by David Torrents on this difficult path, his lordship told me, verbatim, “I apologize, Mr. Martinez, for not giving information about the Magnet to the Mossos d’Esquadra.” A very harsh phrase for me.

Questions arise inside me as I move forward and receive information. Why did the national police visit Iman de Ripoll up to three times before the attacks? Why will he not be extradited after his sentence in Castellón prison? Why is Spain denying a commission of inquiry, when it has been carried out in all EU countries? What was said at the commission of official state secrets in Madrid, which the victims cannot know? Why did my son and 15 other innocent people die? What has improved since then? Neither the attention to the victims has improved nor do they want to investigate what happened that day after new repeatedly justified questions.

There is more information and statements that I have to reserve for the trial and after it. That’s why we decided to present ourselves alone, with help, representing all those people like us. Let us be aware that anyone could be in our place; therefore, we believe that our struggle is in the common interest. Know what will fail and what can be improved. Give meaning to all the pain experienced.

We ask for a commission of inquiry, necessary to solve questions that many people and in particular the victims ask us, in the same way that was carried out in the Madrid attack of the 11M:

The result of our request was as follows:

We can see, for example, the constant incongruity of the Socialists: Vote yes in Parliament, no in the City Council and no in Congress.

We wonder what right some deputies in the official state secret commission have to receive certain information that victims cannot dispose of.

Then, we find deputies like Joan Tardà and Jordi Xuclà. Do MPs have the right to have information that victims do not have? And why not be able to use the information, for example, in court?

Here you can see the constant incongruity of scattered information.

We stand at the trial

Given the constant unexplained refusal to create a commission of inquiry along with the information that was coming to us from different parties, we decided to go to court in particular to ask for explanations and contact Jaume Alonso Cuevillas for his career and knowledge in cases similar as a lawyer.

Below is some relevant information that we believe should be investigated and not investigated.

This section will be constantly updated with new news. Currently 18 news.

The Court will not question the CNI agents who will visit the Imam of Ripoll in prison.

The Criminal Court unquestionably rejects all the diligence and testimony requested by the father of the 3-year-old boy murdered in the attack on Las Ramblas, but the lawyers believe that it leaves the door open to request a new piece to investigate. ” the action of the Security Forces and Bodies or to check the degree of knowledge that the state intelligence services might have about the radicalization of Es Satty, the brain of the jihadist cell in Ripoll.

The National High Court is shielding itself from the death of the imam of Ripoll for not investigating the role of the CNI.

Judge Calama Teixeira dismisses the appeal of the father of the three-year-old boy killed on the Rambla, requesting diligence and testimony on the relationship between the head of the jihadist cell and the secret service, taking refuge where the prosecution order does not include Satty as a defendant, on account of his death, and arguing that “the facts which are intended to be denounced are not connected” with this act and “exceed the object of the instruction of the present cause.”

The judge refused to cite CNI agents and civil guards who saw the magnet in prison.

The Court assumes the prosecution’s thesis that asking the National Intelligence Center to provide its reports on Es Satty “exceeds the scope of the investigation in the present proceedings”, but Xavier’s father’s lawyer, murdered in Las Ramblas at the age of 3, he will go through the interlocutory. Regarding the officers’ visits to the imam, the judge is satisfied that it was “a task of investigation of the task entrusted to them in the prevention of serious crimes” prior to the terrorist cell of the 17A.

Synthesis of the materials and sources that this newspaper has published in the successive chapters of the exclusive and that do NOT appear for a long time in that initial anonymous complaint… only confirm it.

In compliance with the Freedom of Information Act, the Office of the U.S. Director of National Intelligence says there is no record of alleged messages from the National Anti-Terrorism Center (CNTC), first to the Mossos and then as response to CITCO, which were leaked after the bloody attacks in Barcelona and Cambrils.

Javier asks for help to reach the trial of the attacks in the national court. J.Alonso explains doubts found in the summary sheets.

Crowdfunding to find out the truth about the Imam of Ripoll

In 17A, in trial: the three accused of the attacks will not be tried for murder

The judge sees no evidence of direct involvement of the defendants in the 16 deaths in Barcelona and Cambrils, so they will not be tried for the murder.

The father of the boy who died in 17A: “I could not mourn because I began to know things”

Some relatives of the victims of the 17A attacks are calling for changes to the protocols and a commission of inquiry to clarify the facts.

Alcanar demands that all those affected by the explosions of two years ago be recognized as victims of terrorism .

Second anniversary of the attacks, tributes.

Claim to clarify the 17A

The ignored victims of the 17A

The psychological victims of the attacks in Barcelona and Cambrils report that they do not receive any kind of help, not even therapeutic help.

The association that guides them, Uavat, indicates that the Ministry of the Interior has rejected 82% of the demands. So far, the organization has served 210 people.

Moncloa avoids valuing the relationship between Es-Satty and the CNI

Celaá defends that explanations have already been given to the Congress. Battery of ERC questions to the Spanish government.

The state will not exist.

Rajoy was shocked by the 17-A attacks on the Galician summer retreat and did not speak until the next morning. He will not mention Barcelona on Twitter and will never go to La Rambla or Cambrils. He held the first crisis meeting without the Mossos ignoring Forn and Trapero. Zoido displayed the photo of Abouyaaqoub and “disarticulated” the cell prematurely.

The sister of a 17A victim: We want to know the truth.

Relatives of Xavi, the three-year-old murdered on the boulevard, are pushing for crowdfunding to continue the investigation into the Barcelona and Cambrils bombings.

Mireia explains that this crowdfunding aims to cover the costs of lawyers and travel that have already exceeded the limit that the family could assume. “We believe there is a lot left to clarify, and we need it done.”

The Civil Guard and the Public Prosecutor’s Office will overlook the key testimony on the relationship between the Imam of Ripoll and the CNI in the 17A summary.

The summary of the attacks in Barcelona, to which the public has had public access, shows that the statement of the president of the Belgian mosque about the alleged contacts of Es Satty with the Spanish secret services in 2016 was hidden in a CD Room with an index where this content was not indicated and was delivered to the judge in Dutch only.

Javier Martínez: ‘We know that the DNA of the imam of Ripoll will not reach Madrid’

Dutch journalist Lex Rietman talks about the situation of the victims of August 2017. Judicial process and political contexts.

Link (ENG)
Back to top